The ninth SWIFT Business Forum in Moscow took place at the Lotte Hotel on 18 April 2018. Organised for the fifth year running in conjunction with the ROSSWIFT (Russian national SWIFT member and user group) Annual General Meeting (AGM), the event attracted a record 580 delegates, a turnout that clearly reflected Russia’s position as SWIFT’s second largest user community. The agenda for the day focused on cyber-security, financial crime compliance, the increasing adoption of the ISO 200022 standard and evolutions in the payments landscape.

Zhuravlev stressed the importance of the event for the Russian financial community and paid tribute to the neutral role that SWIFT plays in the global financial system. “I would like to congratulate all Russian SWIFT users for the fact that ROSSWIFT has obtained a large messaging discount. Furthermore, the largest discount is for small and medium-sized users, which is a great achievement. By working in Russia, SWIFT confirms its neutral status and this is particularly important in the current tense environment. We hope that SWIFT will continue to stay outside of politics, despite pressures, and keep up its long track record of serving the Russian community, which is to the benefit of the whole financial system,” he stated.

SWIFT CEO, Gottfried Leibbrandt, confirmed this commitment, saying that “Neutrality is integral to SWIFT, it’s one of our core principles. As a unique utility to the global economy, we believe in serving the global financial community in its entirety. Having as many customers on our network as possible is beneficial to everyone, and in the interests of all global economic flows.” 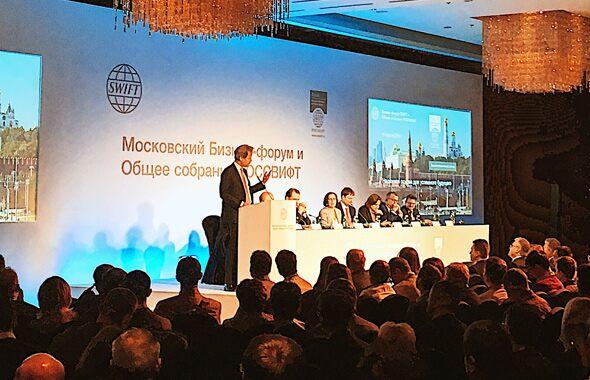 Commenting on the long-standing cooperation between SWIFT, ROSSWIFT, the Bank of Russia and the Russian financial community, Alla Bakina, Head of National Payment System Department, the Bank of Russia, said: “The Bank of Russia highly values the productive cooperation established with SWIFT for the provision of continuous, transparent, secure and resilient execution of financial transactions for its Russian users. It is important to maintain our constructive dialogue in the future.”

Natalia Dirks, Senior Vice-President, Sberbank, and Chairperson of Committee of Russian National SWIFT Association (ROSSWIFT), on behalf of the ROSSWIFT steering committee, thanked Leibbrandt for his statement on SWIFT’s neutrality. “Trust is the foundation of business and the relations between countries,” she said. “I would like to thank Gottfried for SWIFT’s support and will ensure that his message is conveyed to the CEOs of all Russian banks.”

Eddie Astanin, Chairman of the Executive Board, National Settlement Depository and the newly re-elected Russian representative on the SWIFT Board of Directors added: “SWIFT's position is very coherent and professional. This elicits deep respect from the community. Earlier in 2014, as well as in March of this year, SWIFT made an official statement, which fully answers this question, namely: ‘SWIFT will not respond to individual calls and pressure to disconnect financial institutions from its network".

Georgy Luntovsky, President of Association of the banks of Russia, said: «I would like to note that the tradition of holding the ROSSWIFT Annual General Meeting in conjunction with the SWIFT Business Forum is a good example of combination of the global experience and national practice. This has really helped Russian users to learn about the latest SWIFT developments, products and services and their implementation taking into account Russian legal requirements and business practices».

In his speech, de Heering touched on the highlights of the cooperation between SWIFT and the Russian financial community over the past year. One of these was the coming into effect of the community pricing deal for Russia. In January 2018, because of the positive growth in domestic messaging traffic over the previous 12 months, the country deal came into effect, bringing even greater benefits than those that were outlined when the community deal was first announced.   “Having started out in pricing Band 2 in January 2018, I am delighted to announce that traffic growth since then has been such that the Russian community will be moving to even more advantageous pricing band, as from this month,” he said.

Alain Raes, Chief Executive EMEA & Asia Pacific, spoke about the evolution of the payments landscape, with a particular focus on what is happening in Asia where two thirds of domestic retail payments are now made over Alipay and WeChat.  The biggest change that has come about, he explained, is that the customer experience is key and customers are more and more interested in how they want to receive services rather than in the details of those services themselves.

Raes went on to speak about innovation in the cross-border space, where SWIFT gpi is transforming the customer experience and establishing itself as the new standard. “I am very proud to count Russia amongst the most active gpi countries in EMEA. With 6 banks signed up, of which one is live and the other five are already in the implementation phase, I look forward to seeing more Russian banks joining this initiative in the months to come.”

Another achievement has been the dedication and commitment shown by the Russian community to SWIFT’s Customer Security Programme. The Russian Technical Consultation Hub (RTCH), the technical working group for SWIFT users set up by Rosswift and led by Sergey Putyatinskiy, CIO, NSD has driven the very efficient Russian cooperation on CSP, ensuring an impressive country level of self-attestation well in excess of the already high worldwide average of 89%. de Heering noted the very effective collaboration between the Bank of Russia, ROSSWIFT and SWIFT’s CSP team for this impressive result and thanked all parties involved.

Get personalised insights straight to your inbox